This is it! After 20 years of technical developments, evolutions and fine-tuning in combination with 4 scenario variations, the European Robotic Arm (ERA) is now scheduled for launch on July 21st 2021 (with July 22nd and 23rd as back-up dates) on a powerful Proton rocket from the Baikonur Cosmodrome (Kazakhstan). The Russian Multipurpose Laboratory Module, ERA’s home base named ‘Nauka’, will travel along to the International Space Station.

For the Belgian company SPACEBEL, this long awaited lift-off is an important event as the software engineering SME has been closely involved since 1994 in the realisation of the 100% European smart Spacewalker.

ERA is a fully programmable robot arm with an elbow, shoulders and even wrists to be installed on the Russian module of the International Space Station (ISS). Measuring 11m and weighing 630kg, the crane like arm will be able to handle payloads up to 8000kg from inside to outside the Russian ISS segment. Moreover, it will be used during servicing phase such as solar battery maintenance, installation and replacement of elements, visual check of the external walls of the ISS etc. ERA will operate either autonomously or by astronaut command. Its control – in real time or in pre-programmed mode – is possible from both inside and outside the orbital , which is a quite revolutionary feature lacking on its Canadian and Japanese counterparts already attached onto the ISS.

SPACEBEL has several ERA software developments to our credit that have been maintained and upgraded over the years.

For the SPACEBEL team, the upcoming flight of the robotic arm to the ISS is the long-expected crowning glory of numerous years full of challenging activities in the field of human spaceflight. 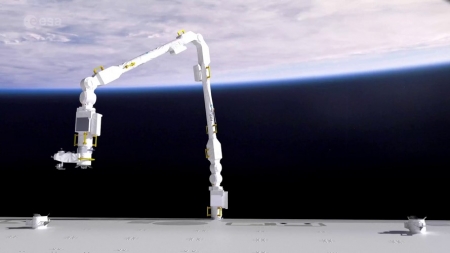