Due to the interruption of Soyuz launches from Kourou and the postponement of the Ariane 6 maiden flight to the last quarter of 2023, ESA had to temporarily revise the launch planning of several missions. Among them the Euclid Space telescope, the Hera probe and the European-Japanese EarthCARE observation satellite, all originally scheduled to launch on a Soyuz rocket and to which SPACEBEL has been bringing our software engineering expertise.

Following the ESA Council meeting on October 20th 2022, Mr Josef Aschbacher, ESA Director General, announced at a press conference that Euclid and Hera are proposed to be launched on a SpaceX Falcon 9. As to EarthCARE, a Vega-C rocket is being considered. The launch schedule indicates a lift-off for Euclid at the end of 2023, for EarthCARE at the beginning of 2024, and for Hera in late 2024.

An overview of the objectives of the three spacecraft with significant SPACEBEL inputs: 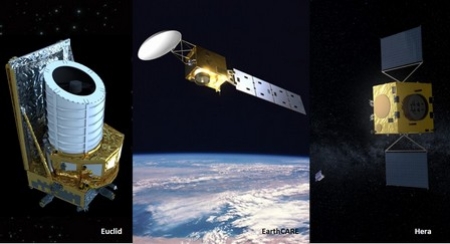