On the night of September 26–27th 2022 the world witnessed the first-ever human attempt to change the orbit of a celestial body for the sake of planetary defence.

At 01:15 AM Belgian time, the US DART probe purposefully smashed into Dimorphos, the 160m wide moonlet of the larger Didymos asteroid at some 11 million km away from Earth.

Launched in November 2021, DART (Double Asteroid Redirection Test) has to test whether a spacecraft can sufficiently deflect any asteroid that might present a threat to our planet.

The collision at a speed of ± 6,6 km per second will slightly shift Dimorphos’ orbit around the main body of the binary asteroid system.

Set to fly off into Space in 2024, ESA’s follow-up mission Hera and its cubesats Milani and Juventas will investigate the aftermath of the kinetic impact. Their aim is to collect more detailed scientific data on Dimorphos in terms of structure and composition, its crater and environment while demonstrating novel technology.

The ultimate goal of this international mission is to validate a viable method to safeguard our planet Earth and mankind from possible asteroid impacts.

A revolutionary initiative to which SPACEBEL is proud to contribute substantially with several major contracts:

A big round of applause to NASA's DART team for this tremendous success and good continuation to the entire Hera mission community! 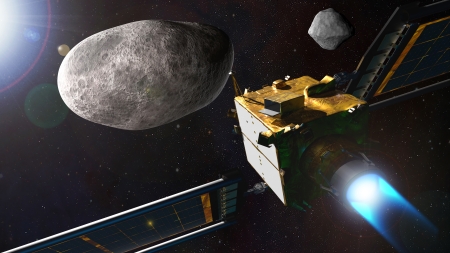