SPACEBEL has also been contributing to ESA asteroid missions. VTS, the visualisation tool for Space Data developed by SPACEBEL in Toulouse for CNES was used in the frame of the historic Rosetta mission in order to monitor the separation, descent and landing phase of the Philae lander as well as the first science sequence on the comet (https://www.youtube.com/watch?v=a4rp9jxiJo0&feature=autoshare). Last year, ESA officially selected SPACEBEL as contractor to realize Hera’s central software architecture, engineering and development featuring extreme on-board autonomy similar to that of a driverless car and requiring state-of-the-art IT technologies.

In collaboration with NASA’s DART (Double Asteroid Redirection Test) spacecraft, the Hera probe will analyse the consequences of a collision with an asteroid in order to test deflection techniques allowing us to defend our planet Earth from threatening asteroids.
The mission’s target is the binary near-Earth asteroid system composed of the 780m diameter Didymos and its 160m diameter moonlet recently baptized Dimorphos. In October 2022, the refrigerator-sized DART will hit the smaller body at 6 km/s, thus shifting the orbit around its parent rock.
Due for launch in 2024, Hera will study the post-crash crater and map the surface of the impacted asteroid through a series of close flybys, thus demonstrating innovative technologies such as autonomous navigation around an asteroid. The spacecraft will also collect important scientific data in order to get a better insight in asteroid structures and compositions.
Dr Brian May, astrophysicist and Queen guitarist tells the story of this pioneering planetary defence initiative in an insightful video.

As a member of the Hera community, SPACEBEL is excited to be closely involved in this revolutionary Earth protection experiment. 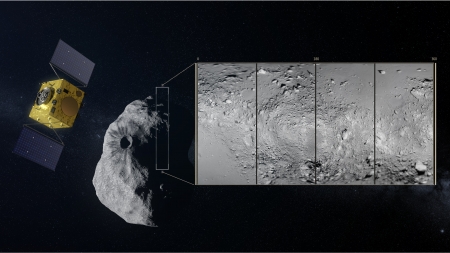