In view of the upcoming Asteroid Day – i.e. the yearly UN endorsed global awareness campaign day on asteroids celebrated on June 30th in commemoration of the terrible asteroid-related disaster taking place on June 30th 1908 in Tunguska (Siberia) – SPACEBEL proudly focusses on our various activities in the frame of ESA’s Hera planetary defence mission, which will revolutionise our understanding of asteroids and how to protect Earth from their potential impact.

The desk-sized Hera satellite – by the name of the Greek goddess of marriage - will be pioneering in many respects. It will be the first spacecraft ever to rendezvous with a binary asteroid – Didymos and its moonlet baptised Dimorphos – as part of a planetary defence initiative supported by ESA and NASA. The experiment will be carried out in two phases.

Hera will also deploy the first European deep Space cubesats: MILANI and Juventas. Their aim is to collect more detailed scientific data on Dimorphos and its environment while trying out novel intersatellite link technology.

“DART (Double Asteroid Redirection Test) is a planetary defense-driven test of technologies for preventing an impact of Earth by a hazardous asteroid. It will be the first demonstration of the kinetic impactor technique to change the motion of an asteroid in Space. The binary asteroid Didymos is the target for the DART demonstration. While the Didymos primary body is approximately 780 meters across, its secondary body is about 160-meters in size, which is more typical of the size of asteroids that could pose the most likely significant threat to Earth. The collision will change the speed of the moonlet in its orbit around the main body by a fraction of one percent, but this will change the orbital period of the moonlet by several minutes - enough to be observed and measured. The Didymos binary is being intensely observed using telescopes on Earth to precisely measure its properties before DART arrives in September 2022. The time window for the launch of DART is November 2021 to February 2022.” (Source: NASA)

“Hera is the European contribution to this international double-spacecraft collaboration. Hera will follow-up with a detailed post-impact survey that will turn this grand-scale experiment into a well-understood and repeatable planetary defence technique. Hera will also demonstrate multiple novel technologies, such as autonomous navigation around the asteroid – like modern driverless cars on Earth, and gather crucial scientific data, to help scientists and future mission planners better understand asteroid compositions and structures. Due to launch in 2024, the Hera spacecraft will perform high-resolution visual, laser and radio science mapping of the moonlet, which will be the smallest asteroid visited so far, to build detailed maps of its surface and interior structure. By the time Hera reaches Didymos, in 2026, Dimorphos will have achieved historic significance: the first object in the Solar System to have its orbit shifted by human effort in a measurable way. By actually venturing to Dimorphos, measuring its mass as well as its shifted orbit from up close and performing its own ‘crash scene investigation’, it will allow, for the first time, the validation or refinement of numerical models of the impact process at asteroid scale, rendering this deflection technique for planetary defence ready for operational use if ever needed to safeguard our home world, Earth.” (Source: ESA)

SPACEBEL is particularly proud to be part of this exceptional international Space adventure meant to protect life on Earth. As usual, our engineering teams aim to guarantee performance and quality of our products, and in particular those that will be on board the Hera spacecraft.

Enjoy these stunning videos on Hera to find out more. 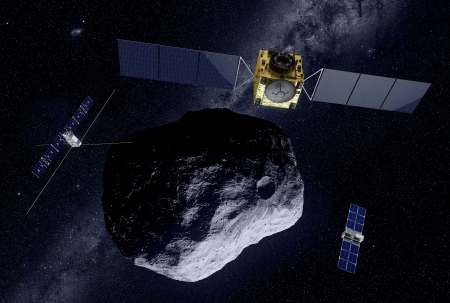