Since its origin some 13 billion years ago, our Milky Way galaxy has been expanding in mass and size through mergers with other galaxies. Thanks to challenging exploration missions such as Gaia, major strides are being made in studying the history, structure and evolution of our galaxy.

Since its launch in December 2013, ESA’s Gaia satellite carrying SPACEBEL state-of-the-art on-board software, is setting up the most accurate 3D chart of about a billion objects throughout the Milky Way and beyond, mapping their motions, luminosity, temperature and composition. Its 3rd data release made public in June 2022 provides even more information on our galaxy’s past, present and future with the most detailed Milky Way survey to date. The colourful image on the left shows 4 sky maps based upon the latest milestone release revealing fascinating insights on stellar velocity, DNA, motions and interstellar stardust.

Moreover, by identifying stars in the new Gaia catalogue that are similar to the Sun in mass and composition – i.e. 5.863 stars in total - astronomers  now have an accurate idea of the evolution of our Sun’s past and future. These recent investigations teach us how the luminosity and temperature of our main star will vary as it ages.

SPACEBEL has developed the management software of the Gaia Payload Data Handling Unit, i.e. a mass memory device storing the scientific data from seven video units that scan our galaxy and beyond before transferring them to the ground stations. 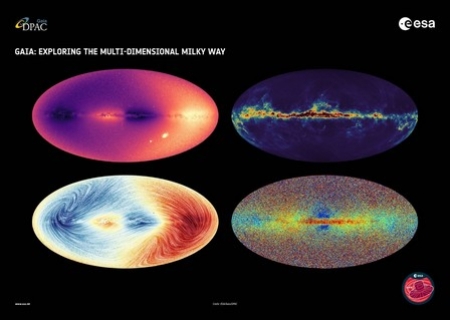