Following the successful completion of all integration activities, ESA’s dark universe explorer Euclid is almost ready for launch. The 2-tonne and 4.5-metre-high innovative Space observatory is now equipped with all on-board subsystems, its scientific instruments, the telescope as well as the solar panel and antenna. Euclid will set off into Space aboard an Ariane-6 rocket from the European Space Centre in Kourou (French Guiana) at a date yet to be determined.

Named in honour of the Greek Euclid of Alexandria (±300 BC), the founder of geometry, the satellite will study the evolution of the dark Universe by observing up to 2 billion galaxies over the past 10 billion years at a distance of 1.5 million kilometres from the Earth. Designed for a liftetime of minimum 6 years and involving huge amounts of data, the mission is meant to answer several questions in the field of cosmology:

Since 2015, SPACEBEL has been in charge of the development of the Euclid on-board software controlling all subsystems and managing the payload data - i.e. highly critical functions that will contribute to the faultless functioning and success of this challenging mission. 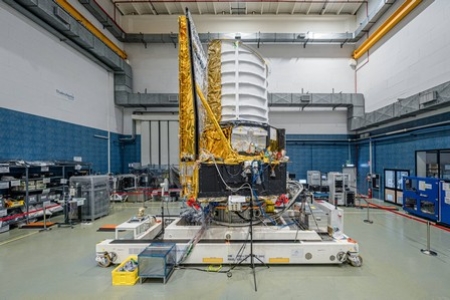