On November 24th 2021, at approximately 1:20 AM EST (7:20 AM CET), NASA's DART (Double Asteroid Redirection Test) probe left the Vandenberg Space Force Base in California on a SpaceX Falcon 9 rocket. Its target: a binary asteroid system consisting of Didymos (780m in diameter) and its moonlet Dimorphos (160m in diameter).

This is a first in the Space industry as the US probe will deflect an asteroid altering once and for all an element of our solar system. This international demonstration mission is meant to validate a viable method for protecting the Earth and all of humanity from asteroids that could threaten our planet.

In September 2022, the refrigerator-sized DART will collide with the smaller of the two bodies at a speed of 6.6km/s, slightly deviating Dimorphos' orbit (by about 1%) around its parent rock. The impact will be visible with Earth-based telescopes and radar.

However, given the distance, scientists will not get an answer to all of their questions. They therefore felt it was important to send an observer around the asteroid in order to undertake a close-up study of the post-collision effects. This outpost is the European HERA spacecraft, which will begin its voyage of exploration at the end of 2024 and to which SPACEBEL is proud to be contributing at several levels. The 800kg cubic space vessel will reach its destination at the end of 2026. Hera will be the first ESA spacecraft to rendezvous with a binary asteroid; it will map the surface of Dimorphos in a series of close flybys, demonstrating innovative technologies such as autonomous navigation around an asteroid.

Hera will also deploy the European Milani and Juventas cubesats. Their purpose is twofold: collect more detailed scientific data on Dimorphos and its environment to gain a better understanding of the structure and composition of asteroids, and test novel inter-satellite link technology.

SPACEBEL has secured several major contracts in the framework of this groundbreaking project:

Congratulations to the DART team (NASA) and best wishes for success to the Hera teams (ESA)!

More info on DART and HERA : 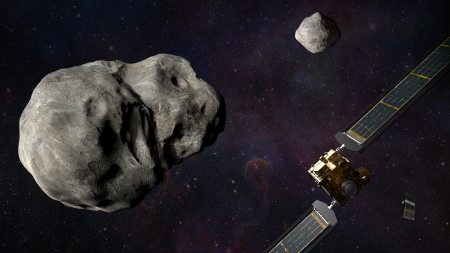